He was born on 27 September 1874 in St. Petersburg. In 1893 he matriculated simultaneously at the law department of the St. Petersburg University and the Imperial Academy of Arts. He studied in the landscape workshop under Arkhip Kuindzhi and consulted with Ilya Repin.

The late 1890s marked the heyday of the Russian art, especially in St. Petersburg where avant-garde groups and unions formed under Sergei Diaghilev’s leadership. Diaghilev studied at the law department a year or two earlier than Roerich and was one of the first art lovers who admired his talent of an artist and a researcher of Russia’s past.

In 1897 Roerich and other students of the workshop quitted the Academy because of Kuindzhi’s dismissal. The same year he met Leo Tolstoy. In 1900-1901 he took classes from Fernand Cormon in Paris. In 1902 Roerich took part in an exhibition by Mir Iskusstva and in 1904 exhibited his works at the Louisiana Purchase Exposition in the United States.

In 1907 Roerich made his debut as a stage designer in the St. Petersburg Old Theatre’s production of The Magi. In 1908 he designed sets and costumes for the Opéra Comique’s production of Nikolai Rimsky-Korsakov’s The Snow Maiden in Paris. In 1909 he produced scenery and costumes for Polovtsian Dances in Alexander Borodin’s Prince Igor and, together with Alexander Golovin, Rimsky-Kosakov’s The Maid of Pskov (both Diaghilev’s productions at the Théâtre du Châtelet in Paris).

In 1910 he chaired the revived Mir Iskusstva.

In the 1900s Roerich’s name was known far beyond Russia. His first exhibition abroad took place in 1905 in Prague. In 1923 the Nicholas Roerich Museum opened in New York City. The same year the artist and his family went on an expedition to India and Central Asia, where he studied traditions, rites, ancient teachings and collected archaeological and ethnographic materials.

The typical features of Roerich’s works are his epic approach and strained emotionality, often with elements of religious mysticism. A noticeable quality of his later works is complicated allegories. The artist called for spiritual formation and for focusing on a person’s mission in the mortal life and the conflict between good and evil.

Nicholas Roerich is an outstanding figure in the Russian and world’s art. His works attract by the originality of themes, their poetical nature and deep symbolism. Roerich’s astonishing life seems to be a legend. Having begun his path in Russia and having passed Europe and America he ended his days in Asia. All these stages were reflected in his paintings, poems and books.

Roerich died in Kullu Valley (India) on 13 December 1947. His body was cremated and part of his ashes was buried on a slope facing the mountains he loved and depicted on many, out of almost seven thousand, of his paintings. 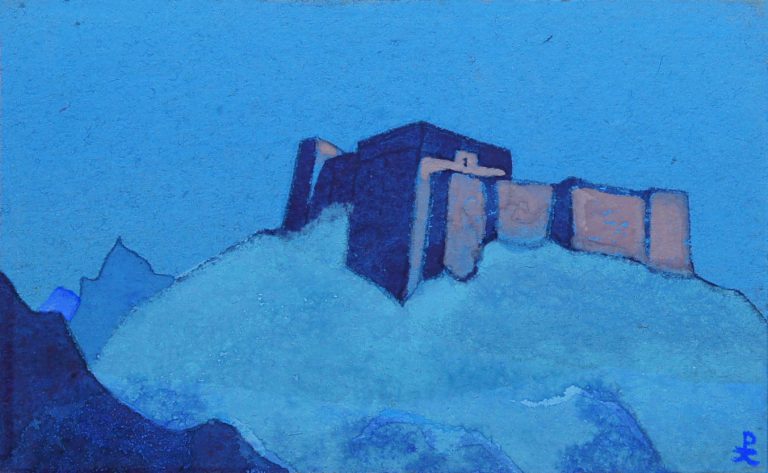