The Future artist was born in 1844 5-th of august in small Chuguev town of Ukraine in military settler’s family. When he was 13 years old he got to the training school to iconographer, and after three years he was invited with team in neighboring provinces to decorate the church and paint an images. In 19 years old he came in St. Petersburg with big hope to get in Art Academy. Repine was delighted and felt an extraordinary mood rising after he got in coveted Academy. As he recognized it was “honey year of happiness”. It seems that no one of the artists didn’t describe so enthusiastic own love affairs as young Repine his first year in Academy about important lecture on descriptive geometry, sculpture classes, World History and fine art. Reverence for science, awe before all learning settled in him strong habit forever. In Academy he achieves violent success and even in one month after admission he put the first number for drawings. The forming Repine as an artist was influenced by the, so-called, progressive democratic aesthetics and criticism. The composition that showed grand talent of young Repine and nominated him in the first rank of Russian artists was «Barge Haulers on the Volga» (1870 – 1873). This artwork aroused not only compassion for the oppressed people of slave labor, but also the belief in its power, the ability to fight against oppression. “Barge Haulers on the Volga” can safely be attributed to both the genre and historical painting. Repine showed an example how sharp social plot might be a subject of great artwork. Genre artwork, each of the characters is endowed with an individual characteristic, acquired monumental character, becoming a generalized image of modern life, not only revealing the contradictions of reality, but claims the people as a political force in society. Plastic strength and breadth of painting at that time were innovative. In 1871 for the painting of «Resurrection of Jairus’s daughter» the artist received a gold medal and the right to go abroad as benefit. As a benefit artist Repine visited Italy and France (1873 – 1876), however, it has not made anything new and bright, then what was going on in European painting. In 1875 he exhibited his artworks in Parisian salon. In 1876 he came back before ending time of his benefit period. In the same year he was awarded the title of Academician for «Sadko» artwork made in France. On his returning to Russia in 1876 began a period of higher peak of his creativity, and continued after in 1882 he moved to St. Petersburg. In a matter of ten – twelve years Repine created the majority of his most famous works. He serves as a portrait painter, a master of domestic and historical picture. The portrait was not only the leading genre, but an undercurrent of creativity Repine in general. While working on large canvases, he systematically used the portrait sketches to determine the shape and characteristics of the characters. In 1874 he began to participate in exhibitions of Association of Traveling Art Exhibitions, a member of the Association since 1878. He presented at that exhibitions works such as “The Princess Sophia in the Novodevichy Convent in 1698” (1879), “Religious Procession in Kursk Province” (1883), “The Unexpected” (1884), “Ivan the Terrible and His Son Ivan on 16 November 1581 “(1885),” Cossacks writing a letter to the Turkish Sultan “(1891),” The arrest of the propagandist “(1892) and others. In 1880 – 1890 worked in the field of book illustration. In 1891 – 1892 in St. Petersburg and Moscow solo exhibitions of the artist were arranged. Also he engaged in teaching activity. In 1892 – Professor, since 1893 – Member of the Imperial Academy of Arts. In 1894-1907 he taught at the Higher Art School of Painting, Sculpture and Architecture at Imperial Academy of Arts, in 1898-1898 – Rector of the Higher Art School. His pupils were – Boris Kustodiev, F.A. Malyavin, A.P. Ostroumova – Lebedeva, I.S. Kulikov, I.I. Brodsky, I.E. Braz, D.N. Kardovsky, I.E. Grabar. Together with his students (and Kustodiev Kulikov) created the monumental painting “Ceremonial session of the State Council of 7 May 1901” (1901 – 1903). Apart Academy conducted painting and drawing at school princess M.K. Tenisheva in St. Petersburg (1897-1899) and Smolensk (1895-1899). In 1900 he settled in the Finnish resort village Kuokkala in the mansion’s second wife, writer N.B. Nordman-Severova. In May 1918, Russia was cut off from the Russian-Finnish border, actually were in exile. Twice rejected the possibility of a return, in 1924, during the celebration of his 80th anniversary, and in 1926, when he received the offer of the Government to return to the USSR. The fact of emigration did not affect the authority and popularity of Repine in the USSR. In 1924 – 1925 in Moscow and St. Petersburg were submitted personal exhibitions of the artist. Repine is great master of painting and graphic portrait; his compositions are characterized by deep psychological, emotional, vitality characteristics (portraits of A.F. Pisemsky, 1880; M.P. Mussorgsky, N.I. Pirogov, both – 1881; P. M. Tretyakov, V.V. Stasov, both – 1883; L. Tolstoy, 1887). Mild sensuality and delicate lyricism infused in painting «Autumn Bouquet» (1892). Generally Repine wrote his paintings on coarse canvases by wide free brushstroke. The color of his work – bright, saturated. In drawing he preferred coal, sauce or chalk. The artistic heritage of the master is huge and it is the hundreds of paintings and sketches, finished drawings and thousands of fugitive sketches. At the current antiques market are more likely to meet the works of the late period (late 1910s – 1920s), most of which was sold the artist’s heirs after his death. Repine creativity is represented in many museums and private collections in Russia and abroad, including the State Tretyakov Gallery, the State Russian Museum, the Research Museum of the Russian Academy of Arts, the Pushkin Museum, Kiev Museum of Russian Art, and others. The artist had lived a long life, the life of man, completely dedicated to his work. His enormous painter talent was recognized by many but not everyone can fully appreciate the historical, social meaning of his art. Repine died at an advanced age, in 1930, and up to the last few years keep brush in his hands. 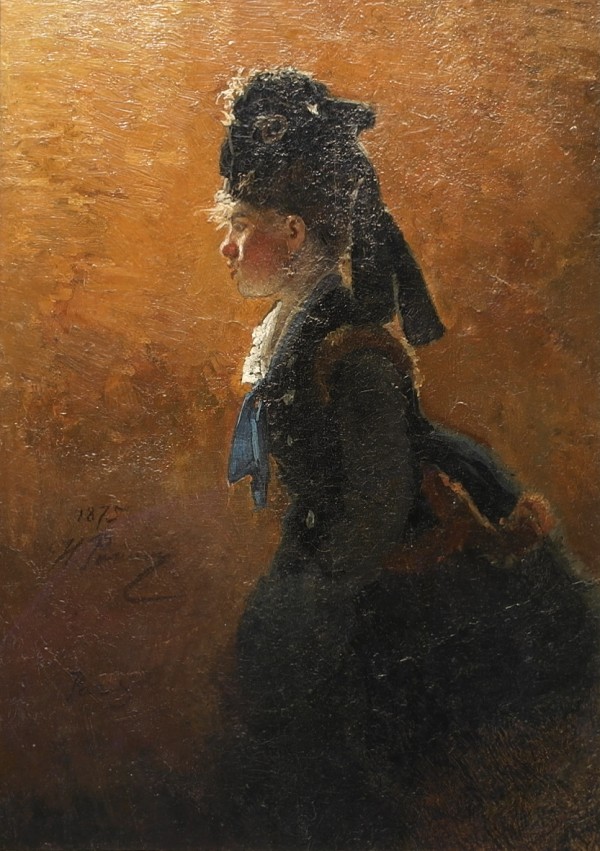